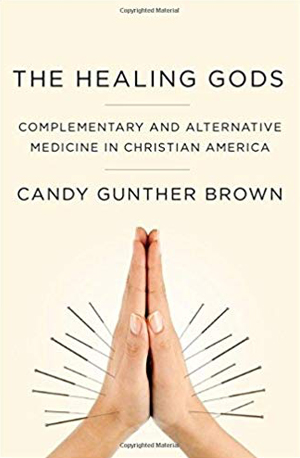 The question typically asked about complementary and alternative medicine (CAM) is whether it works. However, an issue of equal or greater significance is why it is supposed to work. The Healing Gods: Complementary and Alternative Medicine in Christian America explains how and why CAM entered the American biomedical mainstream and won cultural acceptance, even among evangelical and other theologically conservative Christians, despite its ties to non-Christian religions and the lack of scientific evidence of its efficacy and safety.

Before the 1960s, most of the practices Candy Gunther Brown considers-yoga, chiropractic, acupuncture, Reiki, Therapeutic Touch, meditation, martial arts, homeopathy, anticancer diets-were dismissed as medically and religiously questionable. These once-suspect health practices gained approval as they were re-categorized as non-religious (though generically spiritual) health-care, fitness, or scientific techniques. Although CAM claims are similar to religious claims, CAM gained cultural legitimacy because people interpret it as science instead of religion.

Holistic health care raises ethical and legal questions of informed consent, consumer protection, and religious establishment at the center of biomedical ethics, tort law, and constitutional law. The Healing Gods confronts these issues, getting to the heart of values such as personal autonomy, self-determination, religious equality, and religious voluntarism.