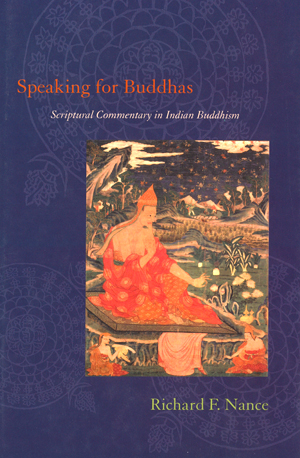 Buddhist intellectual discourse owes its development to a dynamic interplay between primary source materials and subsequent interpretation, yet scholarship on Indian Buddhism has long neglected to privilege one crucial series of texts. Commentaries on Buddhist scriptures, particularly the sutras, offer rich insights into the complex relationship between Buddhist intellectual practices and the norms that inform and are informed by them. Evaluating these commentaries in detail for the first time, Richard F. Nance revisits and rewrites the critical history of Buddhist thought, including its unique conception of doctrinal transmission.

Attributed to such luminaries as Nagarjuna, Vasubandhu, Dignaga, and Santideva, scriptural commentaries have long played an important role in the monastic and philosophical life of Indian Buddhism. Nance reads these texts against the social and cultural conditions of their making, establishing a solid historical basis for the interpretation of key beliefs and doctrines. He also underscores areas of contention, in which scholars debate what it means to speak for, and as, a Buddha.

Throughout these texts, Buddhist commentators struggle to deduce and characterize the speech of Buddhas and teach others how to convey and interpret its meaning. At the same time, they demonstrate the fundamental dilemma of trying to speak on behalf of Buddhas. Nance also investigates the notion of "right speech" as articulated by Buddhist texts and follows ideas about teaching as imagined through the common figure of a Buddhist preacher. He notes the use of epistemological concepts in scriptural interpretation and the protocols guiding the composition of scriptural commentary, and provides translations of three commentarial guides to better clarify the normative assumptions organizing these works.