Christianity, Empire, and the Making of Religion in Late Antiquity 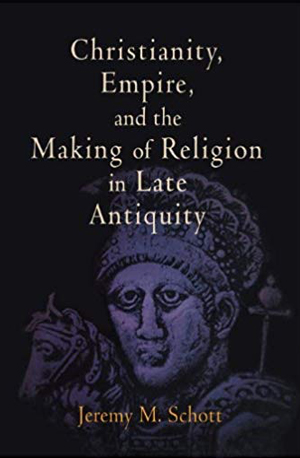 In Christianity, Empire, and the Making of Religion in Late Antiquity, Jeremy M. Schott examines the ways in which conflicts between Christian and pagan intellectuals over religious, ethnic, and cultural identity contributed to the transformation of Roman imperial rhetoric and ideology in the early fourth century C.E. During this turbulent period, which began with Diocletian's persecution of the Christians and ended with Constantine's assumption of sole rule and the consolidation of a new Christian empire, Christian apologists and anti-Christian polemicists launched a number of literary salvos in a battle for the minds and souls of the empire.

Schott focuses on the works of the Platonist philosopher and anti- Christian polemicist Porphyry of Tyre and his Christian respondents: the Latin rhetorician Lactantius, Eusebius, bishop of Caesarea, and the emperor Constantine. Previous scholarship has tended to narrate the Christianization of the empire in terms of a new religion's penetration and conquest of classical culture and society. The present work, in contrast, seeks to suspend the static, essentializing conceptualizations of religious identity that lie behind many studies of social and political change in late antiquity in order to investigate the processes through which Christian and pagan identities were constructed. Drawing on the insights of postcolonial discourse analysis, Schott argues that the production of Christian identity and, in turn, the construction of a Christian imperial discourse were intimately and inseparably linked to the broader politics of Roman imperialism.

Christianity, Empire, and the Making of Religion in Late Antiquity, (University of Pennsylvania Press, 2008)