Human Nature and Spiritual Exercises in Xunzi and Augustine 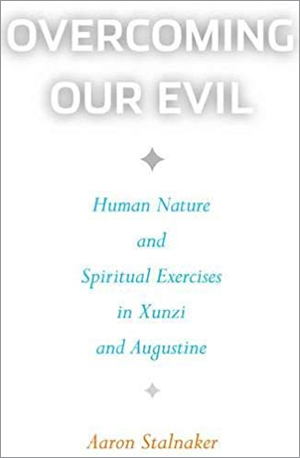 Can people ever really change? Do they ever become more ethical, and if so, how? Overcoming Our Evil focuses on the way ethical and religious commitments are conceived and nurtured through the methodical practices that Pierre Hadot has called "spiritual exercises." These practices engage thought, imagination, and sensibility, and have a significant ethical component, yet aim for a broader transformation of the whole personality. Going beyond recent philosophical and historical work that has focused on ancient Greco-Roman philosophy, Stalnaker broadens ethical inquiry into spiritual exercises by examining East Asian as well as classical Christian sources, and taking religious and seemingly "aesthetic" practices such as prayer, ritual, and music more seriously as objects of study.

More specifically, Overcoming Our Evil examines and compares the thought and practice of the early Christian Augustine of Hippo, and the early Confucian Xunzi. Both have sophisticated and insightful accounts of spiritual exercises, and both make such ethical work central to their religious thought and practice. Yet to understand the two thinkers' recommendations for cultivating virtue we must first understand some important differences. Here Stalnaker disentangles the competing aspects of Augustine and Xunxi's ideas of "human nature." His groundbreaking comparison of their ethical vocabularies also drives a substantive analysis of fundamental issues in moral psychology, especially regarding emotion and the complex idea of "the will," to examine how our dispositions to feel, think, and act might be slowly transformed over time. The comparison meticulously constructs vivid portraits of both thinkers demonstrating where they connect and where they diverge, making the case that both have been misunderstood and misinterpreted. In throwing light on these seemingly disparate ancient figures in unexpected ways, Stalnaker redirects recent debate regarding practices of personal formation, and more clearly exposes the intellectual and political issues involved in the retrieval of "classic" ethical sources in diverse contemporary societies, illuminating a path toward a contemporary understanding of difference.