Authority, Conflict, and the Transmission of Diversity in Medieval Islamic Law 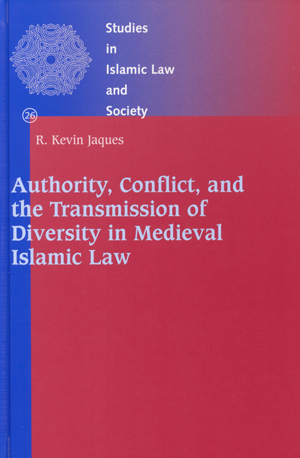 This book looks at Ṭabaqāt al-fuqahāʾ al-shāfiʿīyah by Ibn Qāḍī Shuhbah (d. 851/1448) and how its author attempted to portray the development of the Shāfiʿī school of law up to his own times.

The volume examines the impact of crises on the formation of the ṭabaqāt genre. It demonstrates how ṭabaqāt, dedicated to explicating religious authority, were used by authors to sort-out challenges to intellectual orthodoxies. It also examines in detail the Ṭabaqāt directly, demonstrating Ibn Qāḍī Shuhbah’s depiction of the development of Shāfiʿī law, the formation of intellectual sub-schools within the madhhab, the causes of legal decline, and curatives for the decline that are to be found in the great Shāfiʿī Ikhtilāf (divergent opinion) texts: the ʿAzīz sharḥ al-wajīz by al-Rāfiʿī and the Rawḍāt al-ṭālibīn by al-Nawawī.

Authority, Conflict, and the Transmission of Diversity in Medieval Islamic Law (Brill, 2006).