Religious Discourse in the Supreme Court of the United States 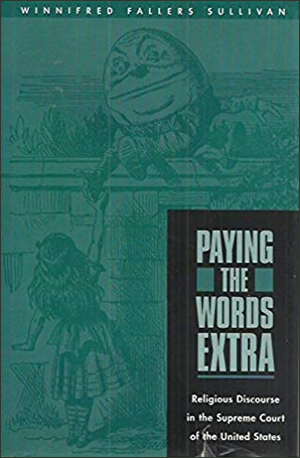 On 5 March 1985, the United States Supreme Court ruled in Lynch v. Donnelly that the inclusion of a life-sized creche as the focus of an annual civic Christmas display did not constitute an unconstitutional establishment of religion. In Paying the Words Extra, Winnifred Sullivan examines the case to illustrate and illuminate the ways in which religion is interpreted, defined, and talked about in American public life today. Sullivan analyzes and critiques the majority, concurring, and dissenting Supreme Court opinions in Lynch v. Donnelly, setting each opinion within its historical origins in U.S. constitutional history and examining each within a comparative context.

Through her analysis of the Supreme Courts opinions, Sullivan reveals distinct and divergent American understandings of the nature of religion, the role of religion in public life, and the relationship and interaction of law and religion. Each of the different discourses about religion represented in the Lynch opinions inadequately represents the nature and diversity of American religions and thus hinders a shared discussion of the First Amendment religion clauses.

Sullivan argues that the creation of a new public language and practice about religion is critical, and that, because of constitutional limitations on the executive and legislative branches, the Supreme Court plays a key role in the creation of such a new language. How should the Court talk about religion? Can it do so in such a way that acknowledges the need to take religion seriously and yet does not establish religion? Winnifred Sullivan asks us to give attention to the way we talk about religion - for, she reminds us, "people's lives are given meaning in the spaces created by words" - and then offers some thoughts on creating a new language that will "pay the words extra" by "honor[ing] both the commitment of the First Amendment and the lived experience of American religious history."

Paying the Words Extra: Religious Discourse in the Supreme Court of the United States (Harvard 1994)