I am a cultural anthropologist whose research focuses on primarily on religion and race. Most of my ethnographic work has focused on Brazil, but I am also interested in the Americas more broadly and the United States in particular. Questions about the relationship between religion, identity, and space have been at the center of my major research projects.

My first book, Religion and the Politics of Ethnic Identity in Bahia, Brazil (University of Florida Press, 2007), focuses on how people of African descent involved with various religious groups construct their identities as people of African descent. In it I explore the variety of ways that religion, racial identity, and social activism intersect in Bahia. My second book project, Sisters in Spirit: Religion, Race and Tourism in Brazil, examines the intersection of religious practice, heritage preservation, and tourism promotion in Bahia. Centering on encounters between Afro-Brazilian locals and African American visitors that happen at the festival of Our Lady of the Good Death (Nossa Senhora da Boa Morte) in the town of Cachoeira, this book explores the complicated role that religious difference plays in the negotiation of national and racial identities.

I am in the planning stages for a third project on religion and the city that, like my work on tourism, is centrally concerned with the relationship between identity and space. The primary site for this project is Chicago, where I examine the complex connections between religion, spirituality, and gentrification.

In addition to these projects, I am interested in religion and fiction. I am especially concerned with speculation on what it means to be human and with ambivalence about narratives of progress in science fiction as a genre. I have taught courses that range in focus from post-apocalyptic and dystopian fiction to artificial intelligence and transhumanism. 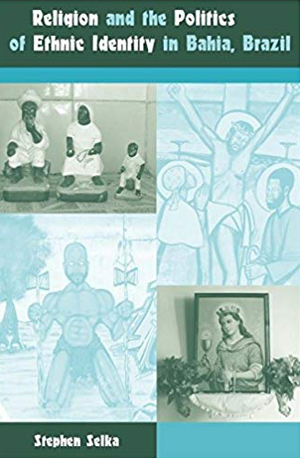 Religion and the Politics of Ethnic Identity in Bahia, Brazil

Religion and the Politics of Ethnic Identity in Bahia, Brazil. University Press of Florida, 2007.

“Morality in the Religious Marketplace: Evangelical Christianity, Candomblé and the Struggle for Moral Distinction in Brazil.” American Ethnologist 37(2): 291-307, 2010.